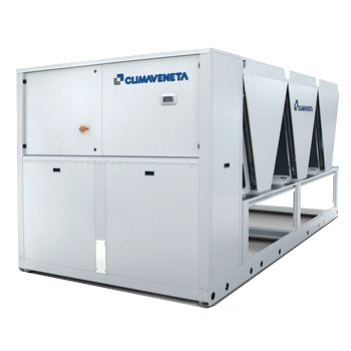 The Compact keypad features an easy-to-use interface and a complete LCD display that allows consulting and intervening on the unit by means of a multi-language menu (19 languages are available).

The regulation is based on the patented “Quickmind” water temperature regulation logic uses self-adapting control to maintain flow  temperatures and optimise performance even in low water content scenarios. As an alternative, the proportional or proportional-integral regulations are also available.

The diagnostics comprises a complete alarm management system, with the “black-box” (via PC) and the alarm history display (via display or also PC) for enhanced analysis of the unit operation.

Supervision can be easily developed via proprietary devices or the integration in third party systems by means of the most common protocols as ModBus, Bacnet, Bacnet-over-IP, LonWorks.

Compatibility with the remote keyboard (up to 8 units).

The programmable timer manages a weekly schedule organised into time bands to optimise unit performance by minimising power
consumption during periods of inactivity. Up to 10 daily time bands can be associated with different operating set points.

The defrosting (air source reversible unit only) follows a proprietary self-adaptive logic, which features the monitoring of several operational parameters. This allows to reduce the number and duration of the defrost cycles, with a benefit for the overall energy efficiency.

This new range is available in the K version, that integrates the maximum compactness with a qualifying unit’s efficiency. This allow to achieve a very high flexibility in the design process as well as during the on-site installation operations, offering a premium solution in
case of reduced clearances or when retrofitting existing installations.

The full aluminium micro-channel condenser coils deliver high efficiency whilst ensuring a reduced refrigerant volume and a lower unit weight. The e-coating protection (optional) grants the highest level of resistance to corrosion in any condition, even in the most aggressive environments.

The optional built-in hydronic module already contains the main water circuit components; it is available with single or twin in-line, for achieving both low or high head