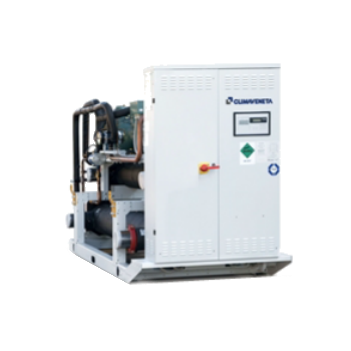 Multi-purpose indoor unit for use in 4-pipe systems for the simultaneous production of chilled and hot water by means of two independent water circuits. These units are able to satisfy the demand for hot and cold water simultaneously through a system that does not require seasonal switching. Each circuit works with a semi-hermetic screw compressor using R134a, and three tube nest heat exchangers, a cold exchanger on the user side shared by both circuits that acts as an evaporator in the production of cold water, a heat exchanger on the user side that words as a condenser in the production of hot water, and a source side exchanger that works as either condenser or evaporator as required by the loads.

The LARGE keyboard with a large format and the wide LCD display favour an easy and safe access to the machine setup and a complete view of unit's staus. The assessment and intervention on the unit is managed through a multi-level menu, with selectable user’s language. The led icons immediately show the operating status of the circuits, as well as of the fans and of the water pumps (if present). In addition to or as an alternative at Large Keyboard, the KIPlink - Keyboard In Your Pocket - is the innovative user interface based on WiFi technology that allows one to operate on the unit directly from the smartphone or tablet.

The regulation operates on both water circuits featuring the step-wise regulation referred to the return water temperature with proportional logic. This allows to satisfy simultaneously the different requests of both cooling and heating, with no need of mode setting.

The diagnostics comprises a complete alarm management system, with the “black-box” (via PC) and the alarm history display (via display or also PC) for enhanced analysis of the unit operation

Optional proprietary devices can perform the adjustment of the resources in systems made of several units. Consumption metering and performance measurement are possible as well.

Supervision can be easily developed via proprietary devices or the integration in third party systems by means of the most common  protocols as ModBus, Bacnet, Bacnet-over-IP, LonWorks. Compatibility with the remote keyboard (up to 8 units).

The programmable timer manages a weekly schedule organised into time bands to optimise unit performance by minimising power consumption during periods of inactivity. Up to 10 daily time bands can be associated with different operating set points.

The defrosting (air source reversible unit only) follows a proprietary self-adaptive logic, which features the monitoring of several operational parameters. This allows to reduce the number and duration of the defrost cycles, with a benefit for the overall energy efficiency

Unit designed to satisfy the cold and the hot side requirements simultaneously, for 4-pipe systems without any particular operation mode setting

Energy saving guaranteed by the advanced operation’s logic. The best operation mode is set completely automatically and independently by the unit’s controller, in order to minimize the absorbed energy whatever the cooling and/or heating demand might be

Supply of hot water in use up to 55°C, offering maximum versatility with respect to different plant engineering solutions

A 2 way valve is supplied as standard for the condensing pressure control. For all the applications in which a constant waterflow through the condenser is needed, a 3-way valve option is also available under request.